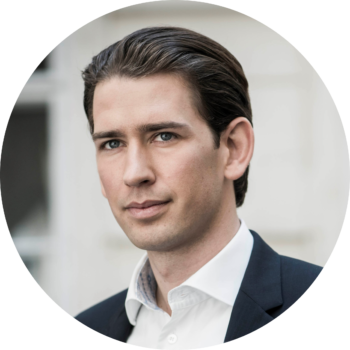 FORMER FEDERAL CHANCELLOR OF THE REPUBLIC OF AUSTRIA

Sebastian Kurz is the former Federal Chancellor of the Republic of Austria who has served in the Austrian government for more than 10 years.

In 2011 he entered the federal government as State Secretary for Integration. After the 2013 legislative election, Sebastian Kurz became the country’s youngest foreign minister. In May 2017 he took over the party leadership as chairman of the Austrian People’s Party and led a successful election campaign in the general elections which the People’s Party won again for the first time in 11 years.

In December 2017 Sebastian Kurz became the youngest Chancellor in Austrian history and was at that time also the youngest Prime Minister elected in the world.

During his time in office, he focused on increasing the efficiency of the public administration while at the same time increasing social equality. The government introduced under his leadership major reforms of the business and social sector to create a more investment friendly business environment in Austria. In December 2021, Sebastian Kurz left politics and started his career in the private sector as consultant and investor with his own company. He remains politically active on a voluntary basis as a member of the IDU Honorary Advisory Board and the International Advisory Council of GLOBSEC.